Ron and I jetted up to Washington two weeks ago to visit Doc Rob and fish the Olympic Peninsula.  We rented a room in Forks and tested our skills on the Bogachiel for a day and the Hoh for another.  The town was flooded with fishing boats in the hotel parking lots and the local diner was packed with guys eating breakfast in their waders, seriously.  Despite the crowds, we had an awesome trip, stuck some nice fish, and will definitely visit again.  A special thanks to Rob for getting the trip together and putting us up for a few nights.  Your hospitality is greatly appreciated! 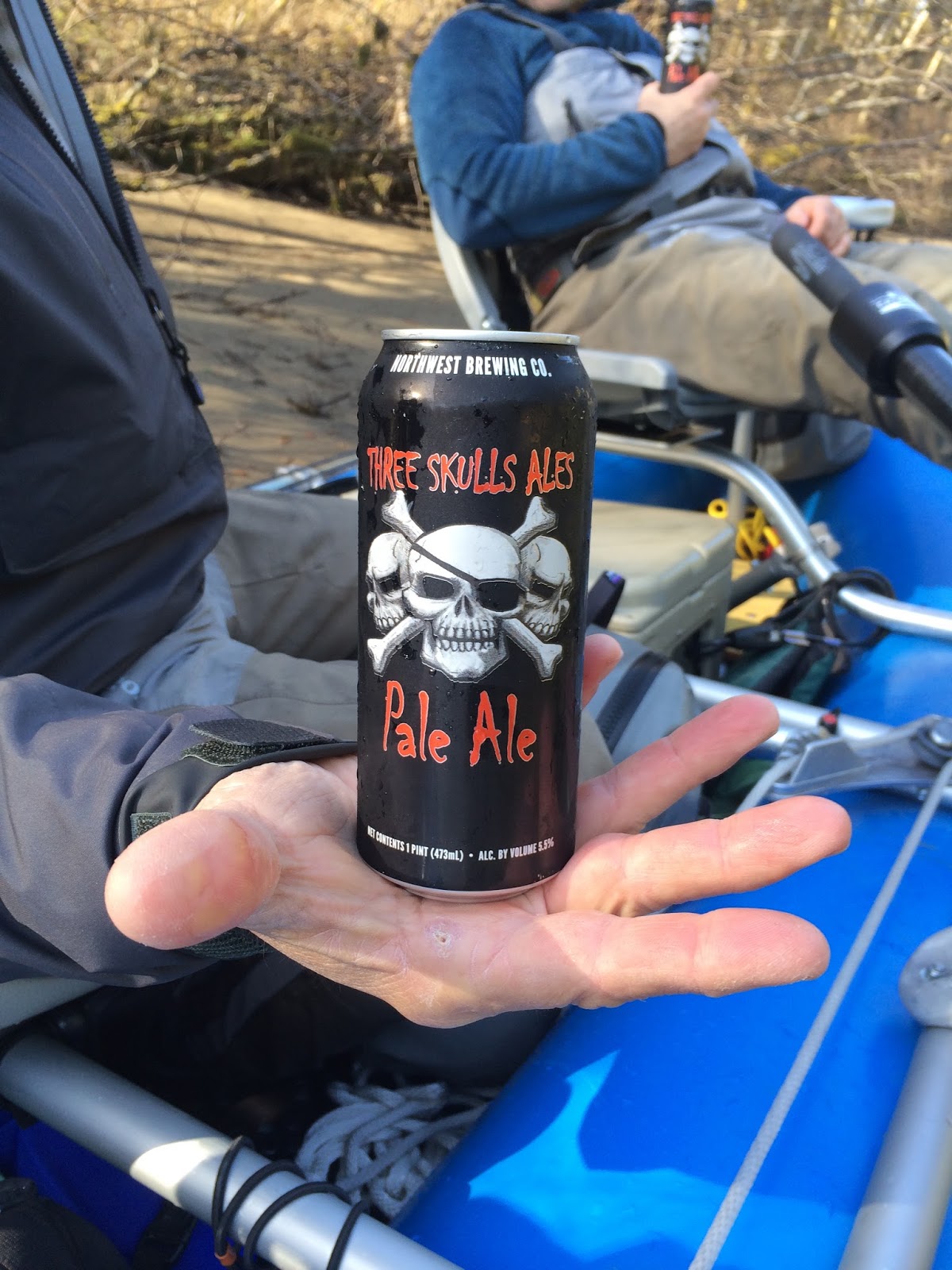 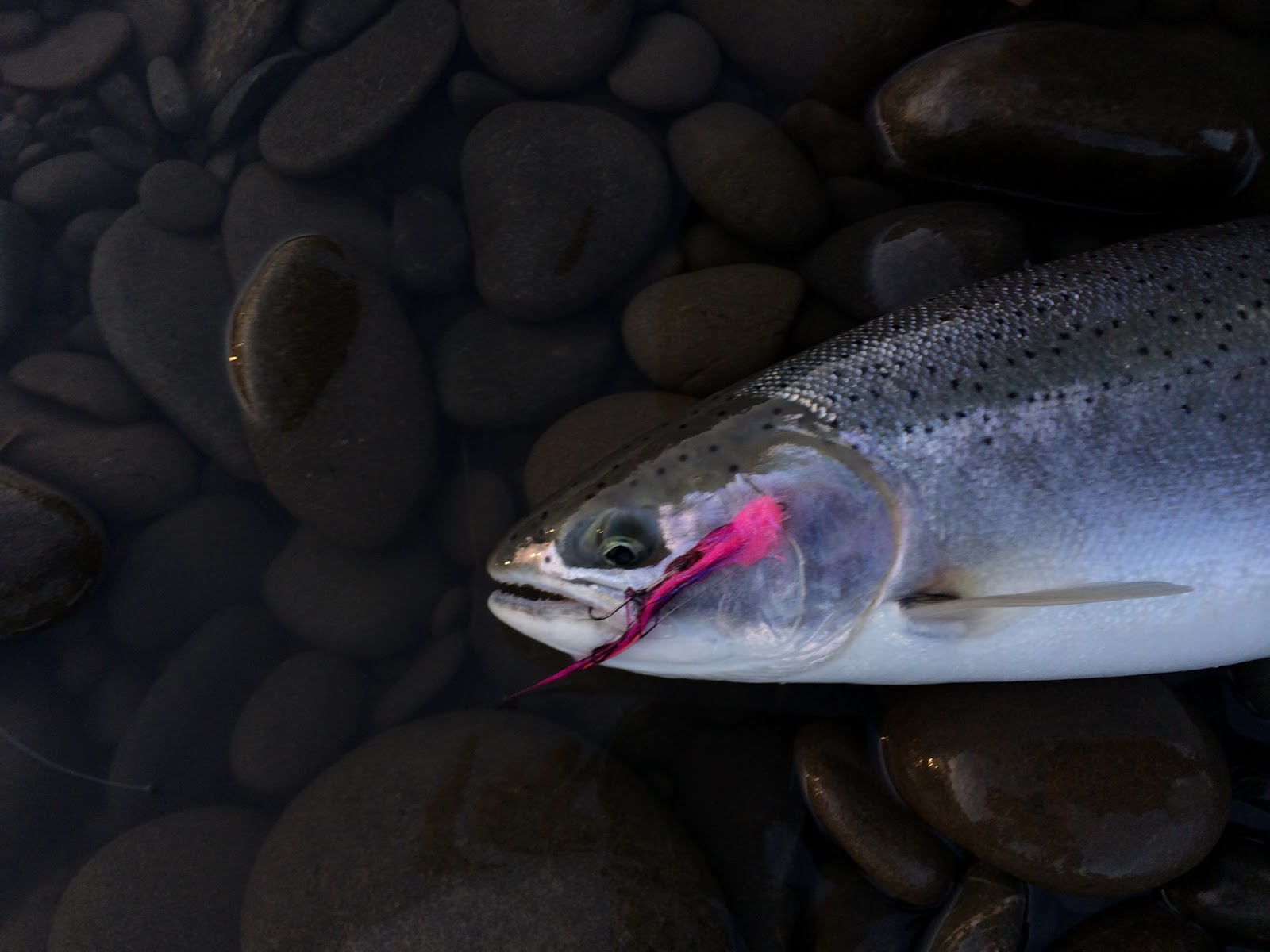 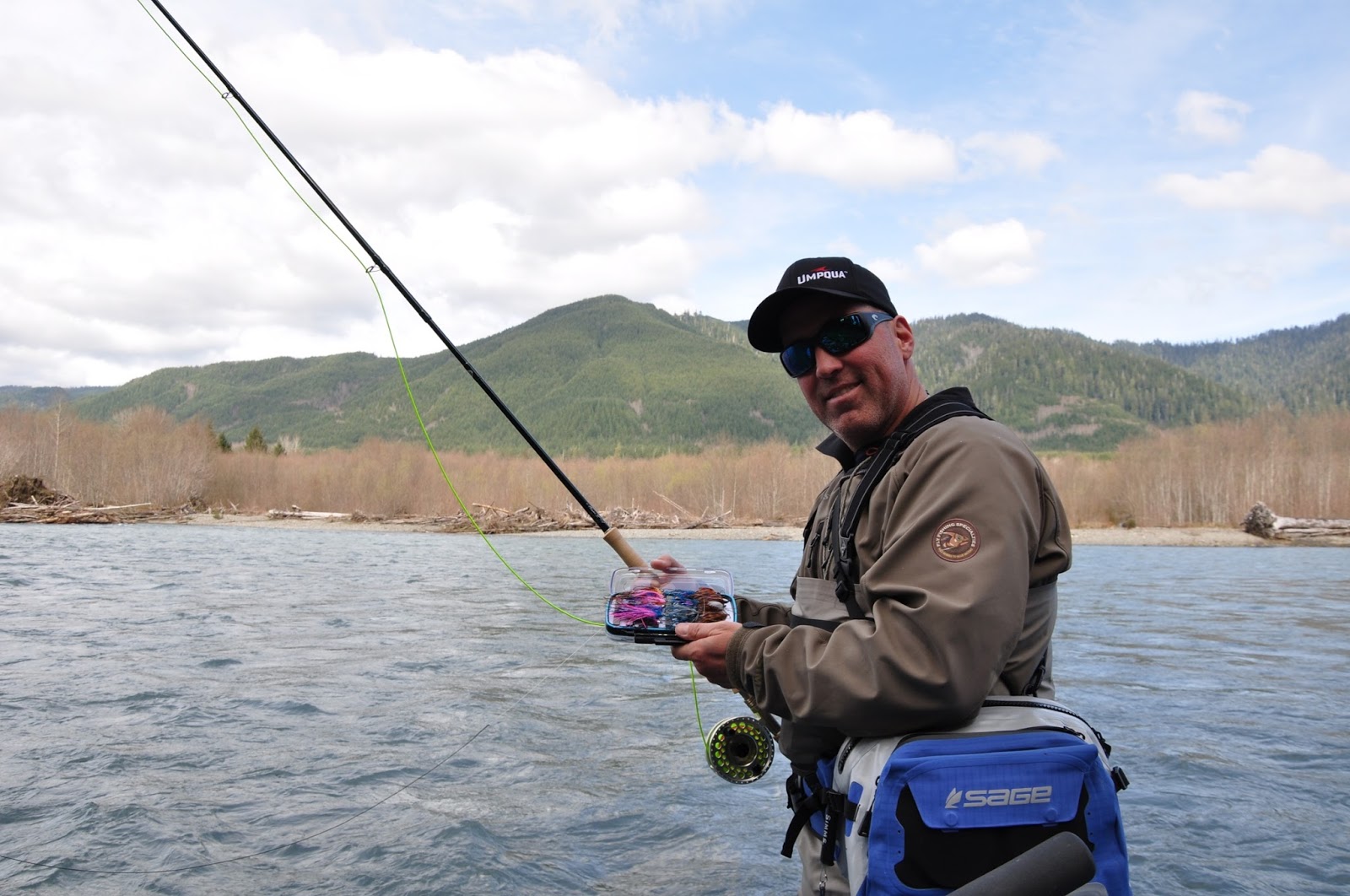 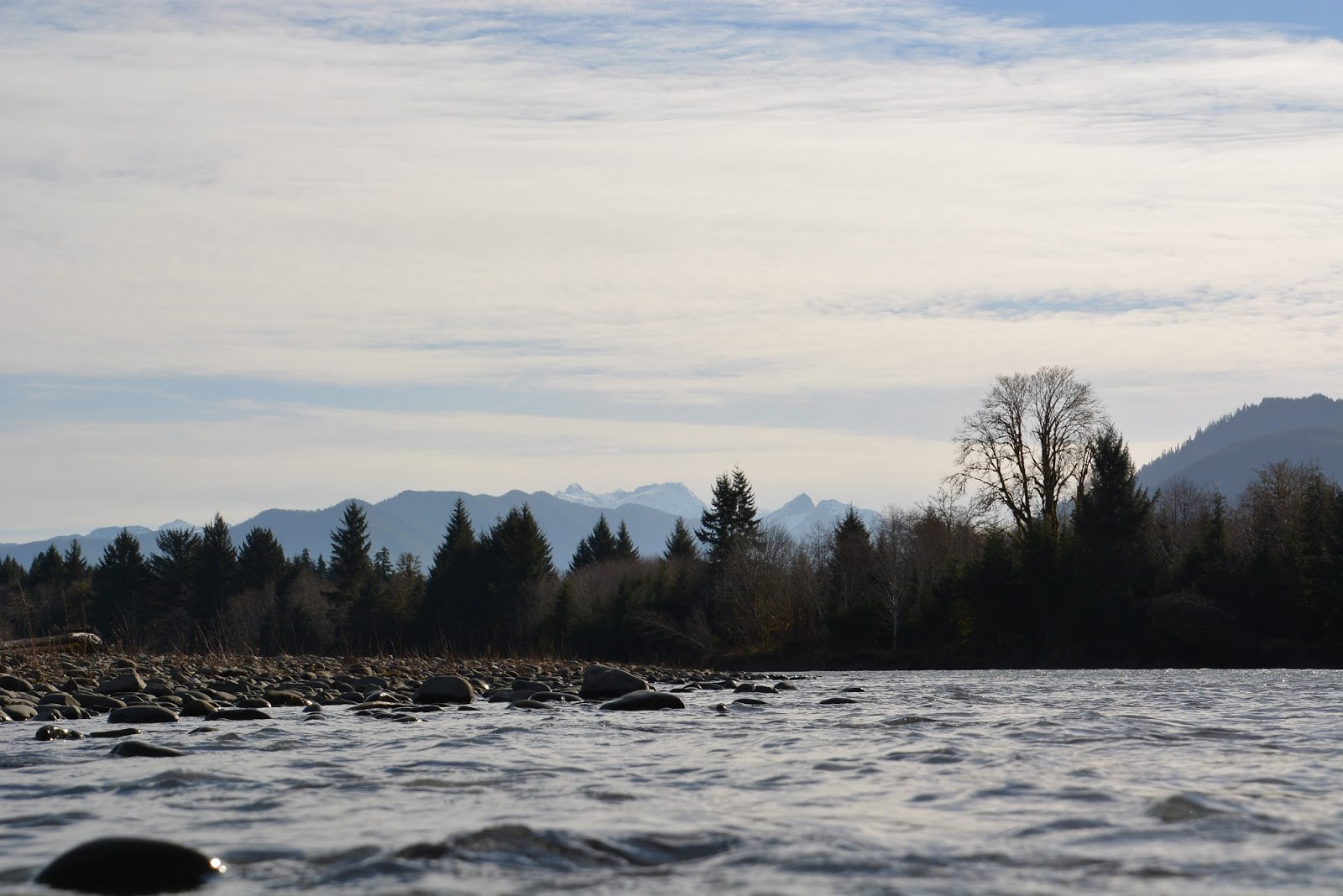 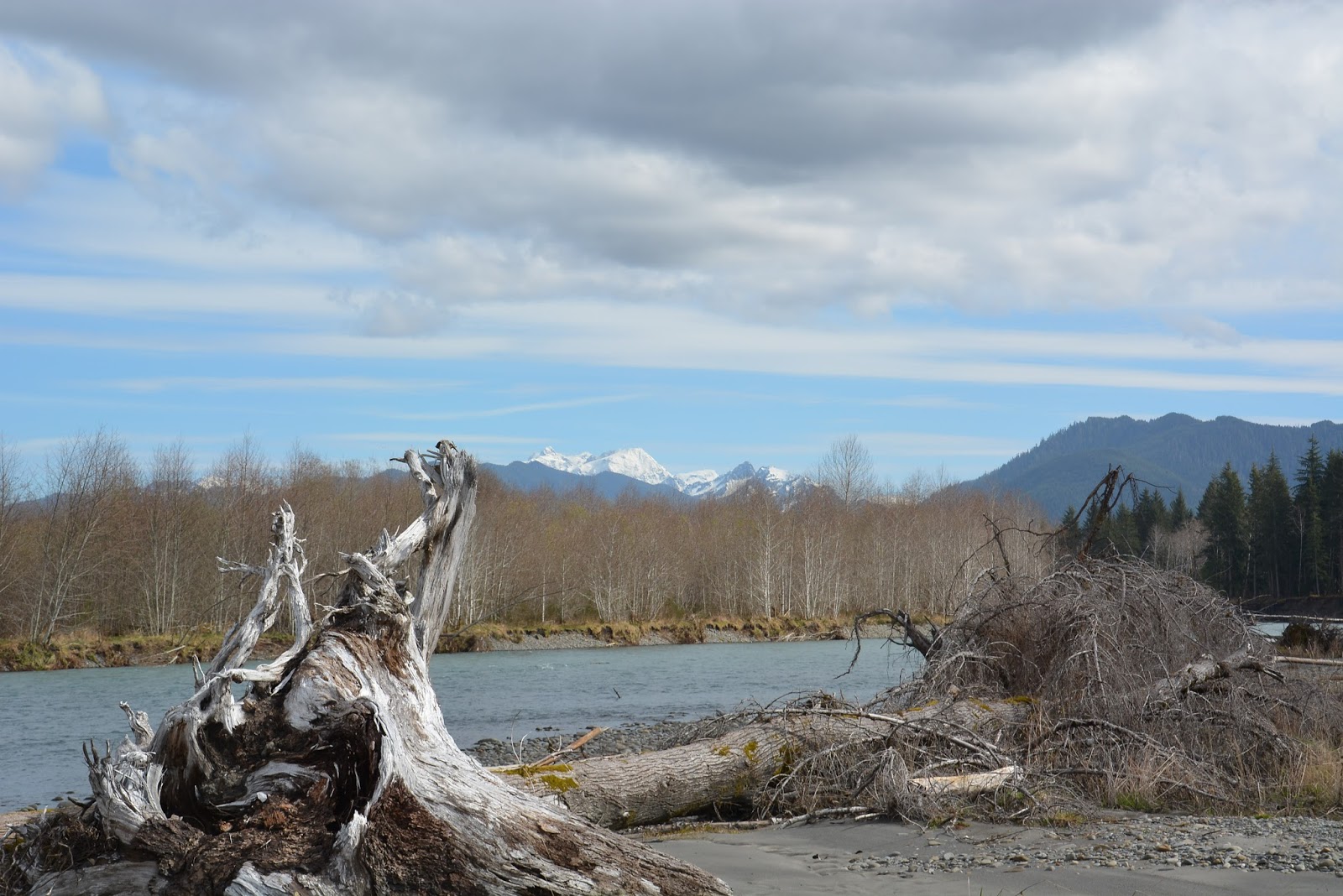 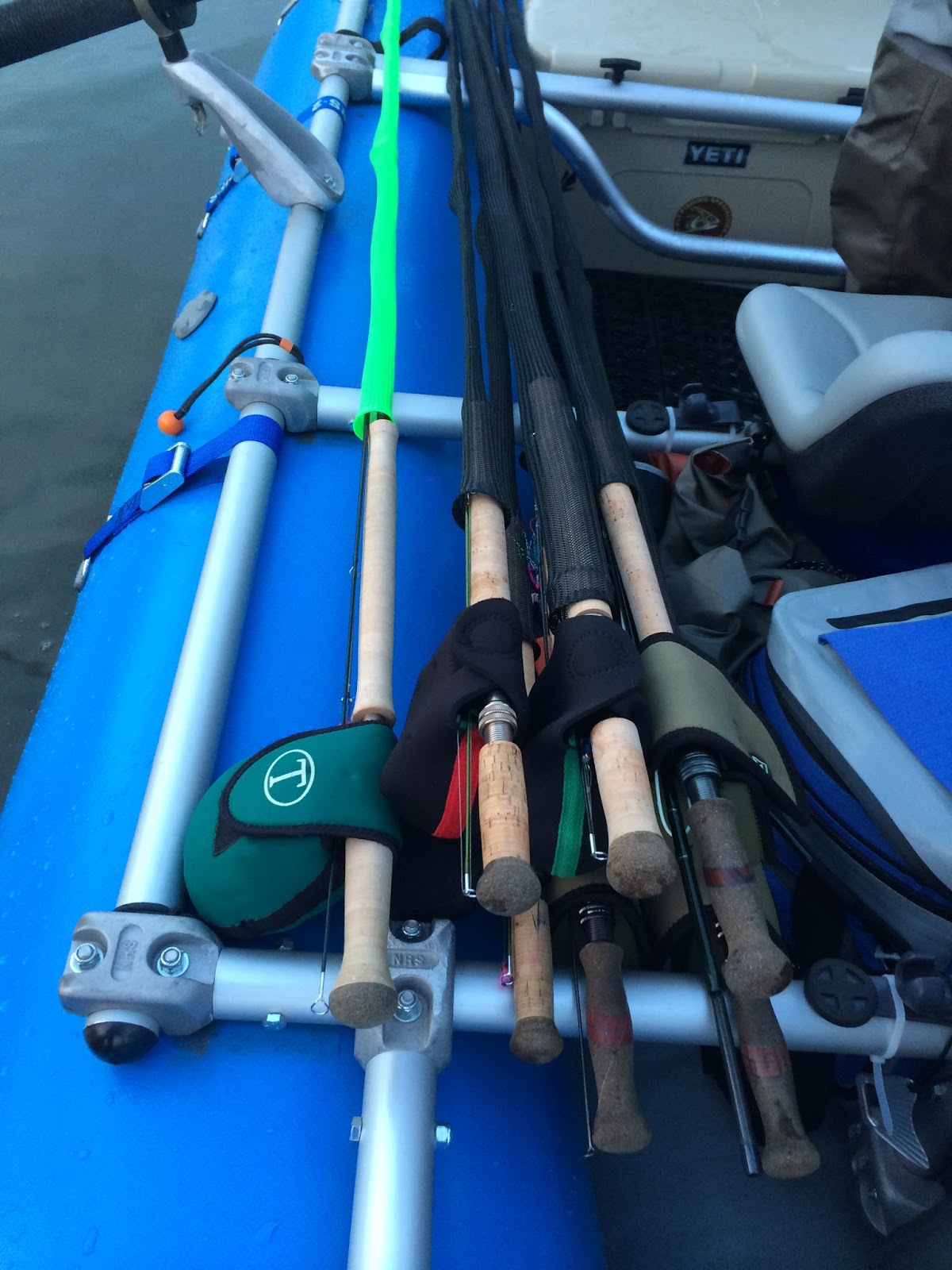 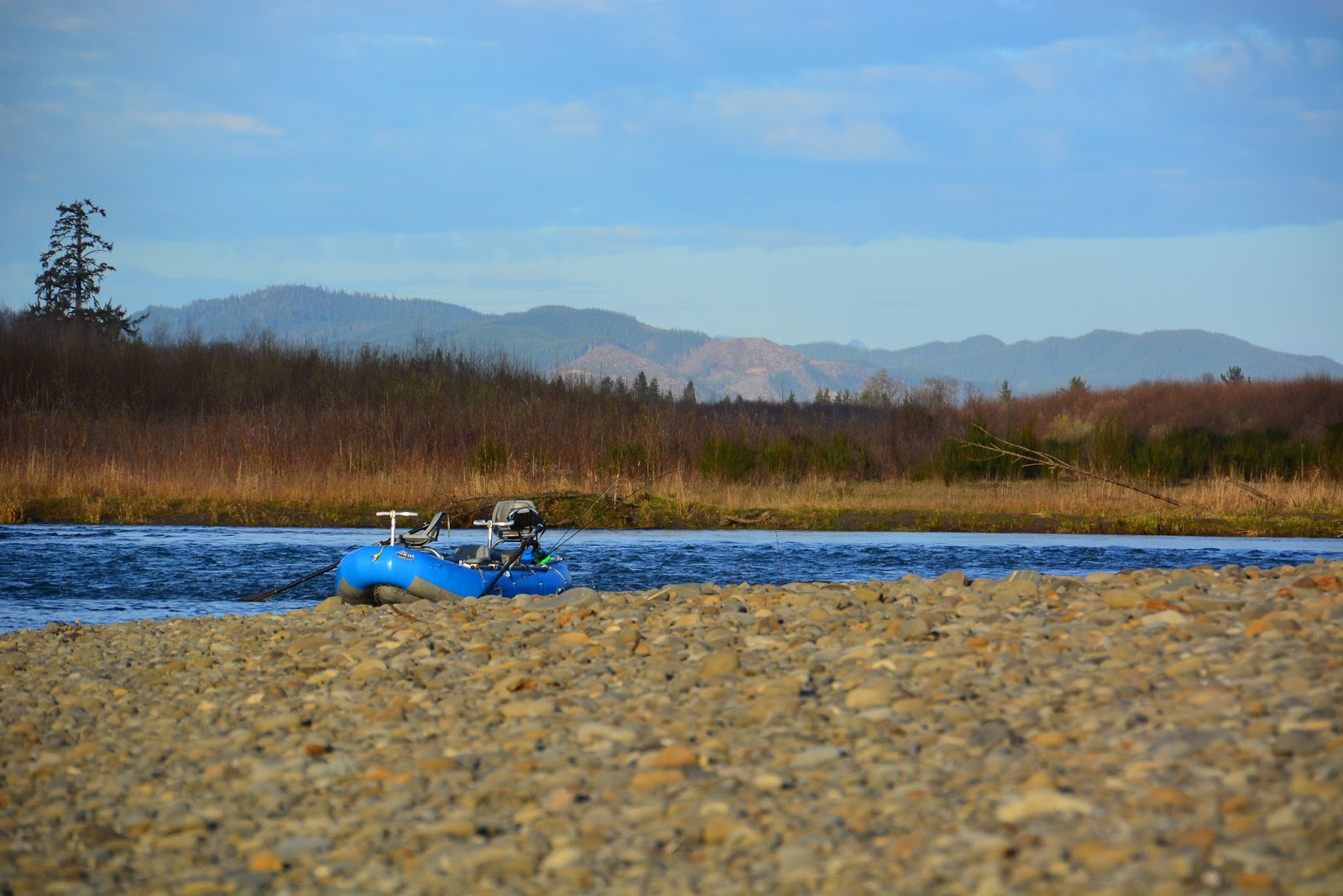 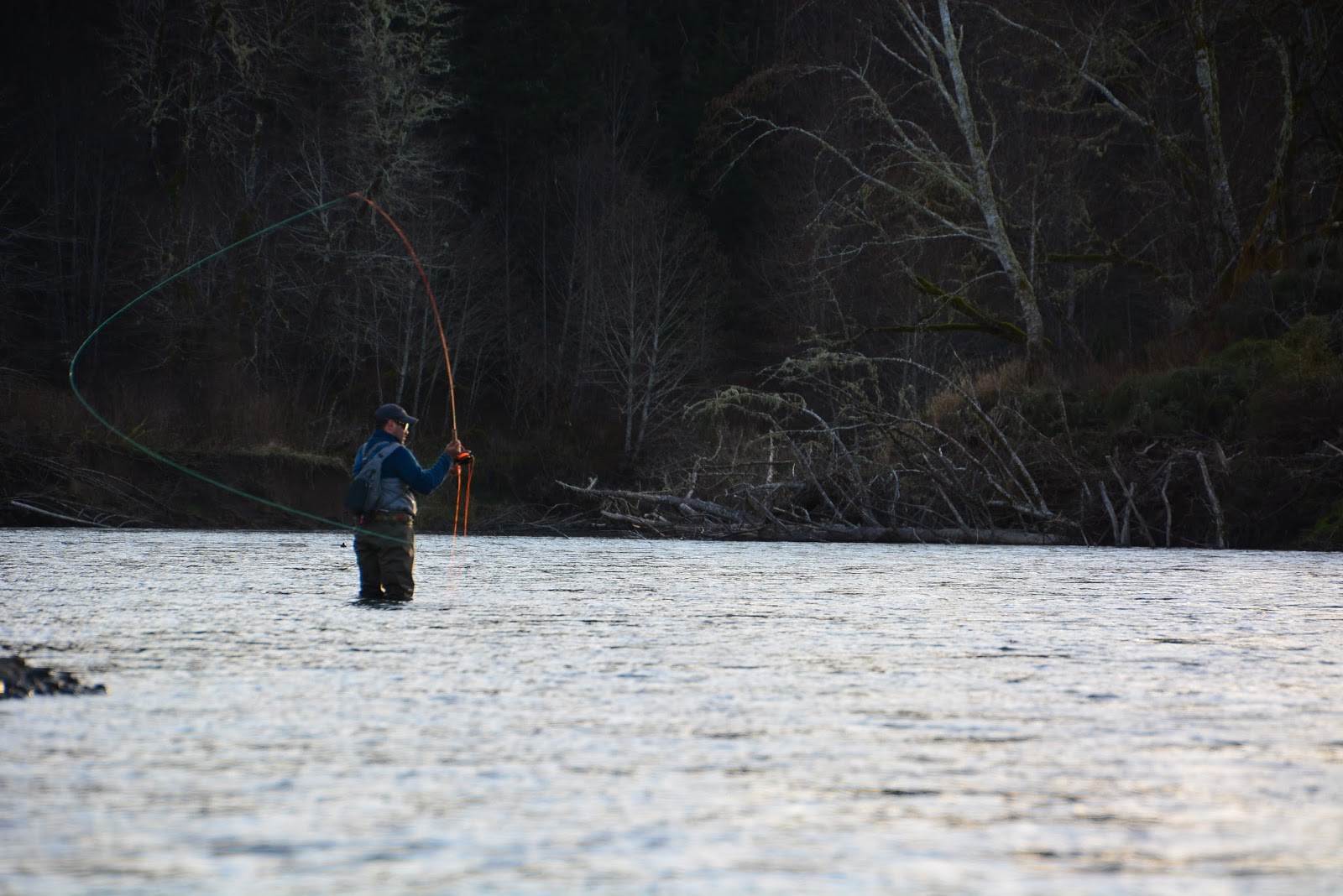 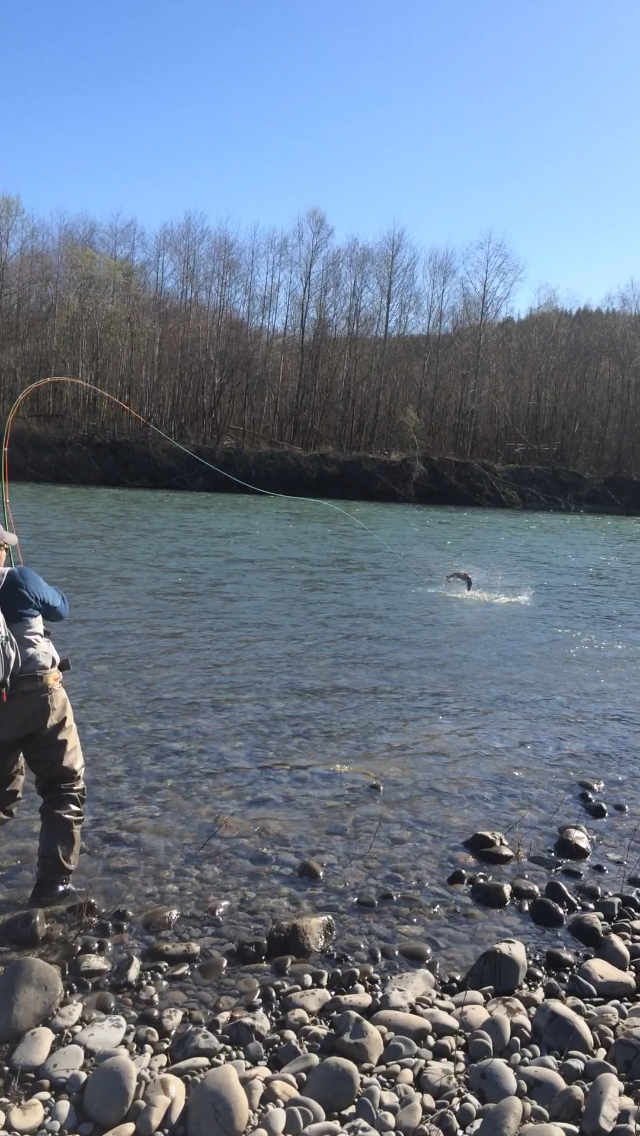 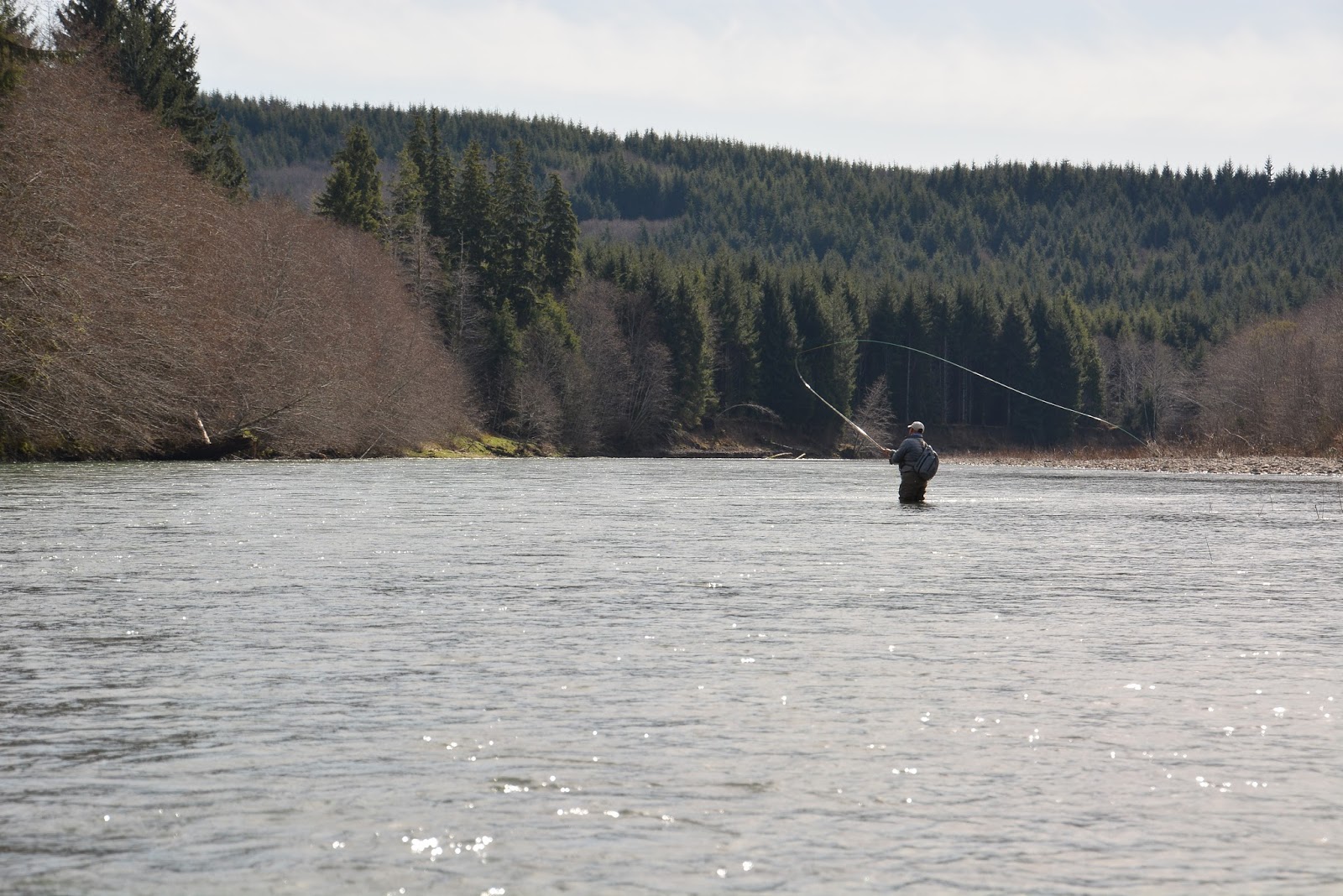 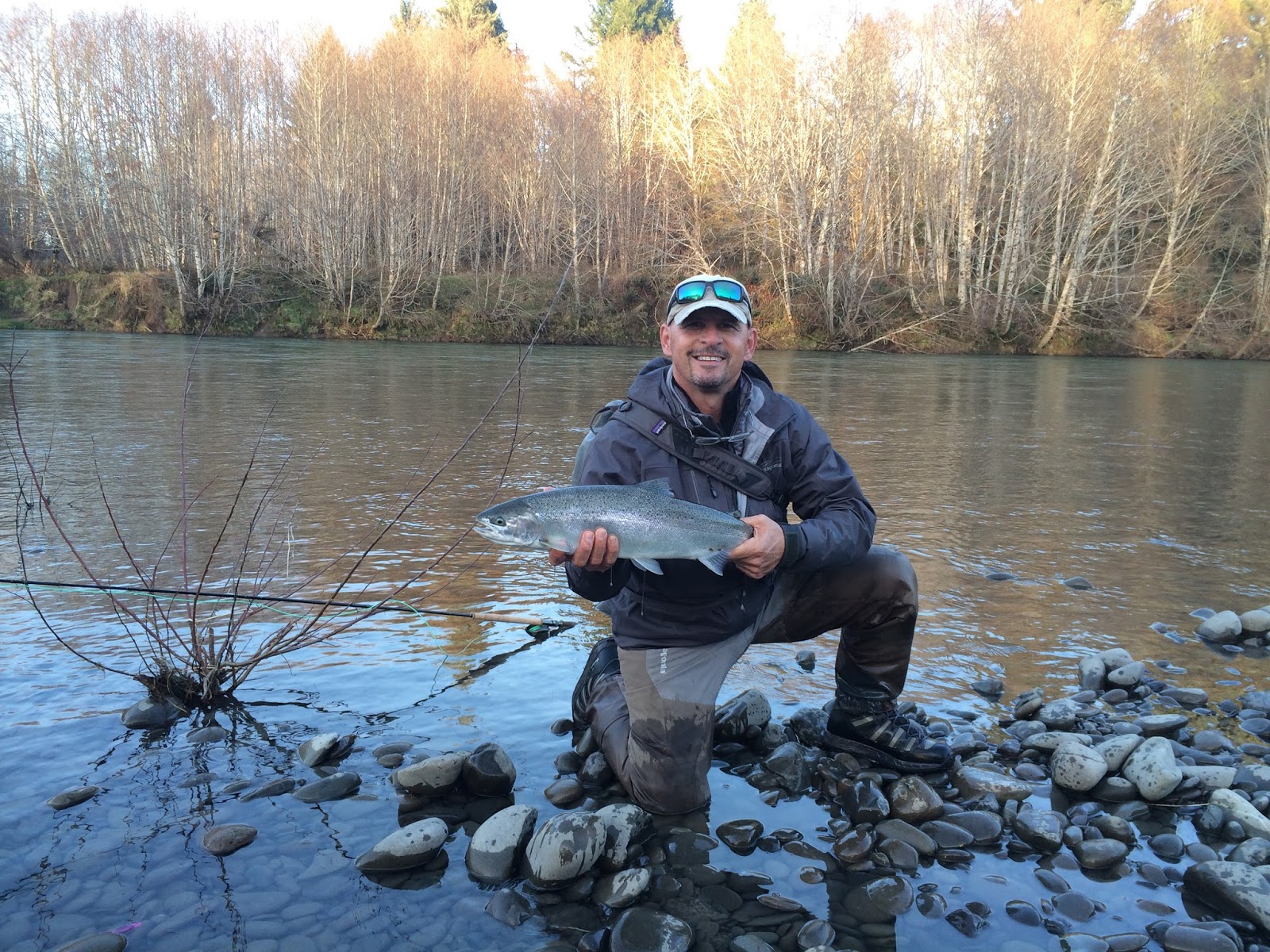 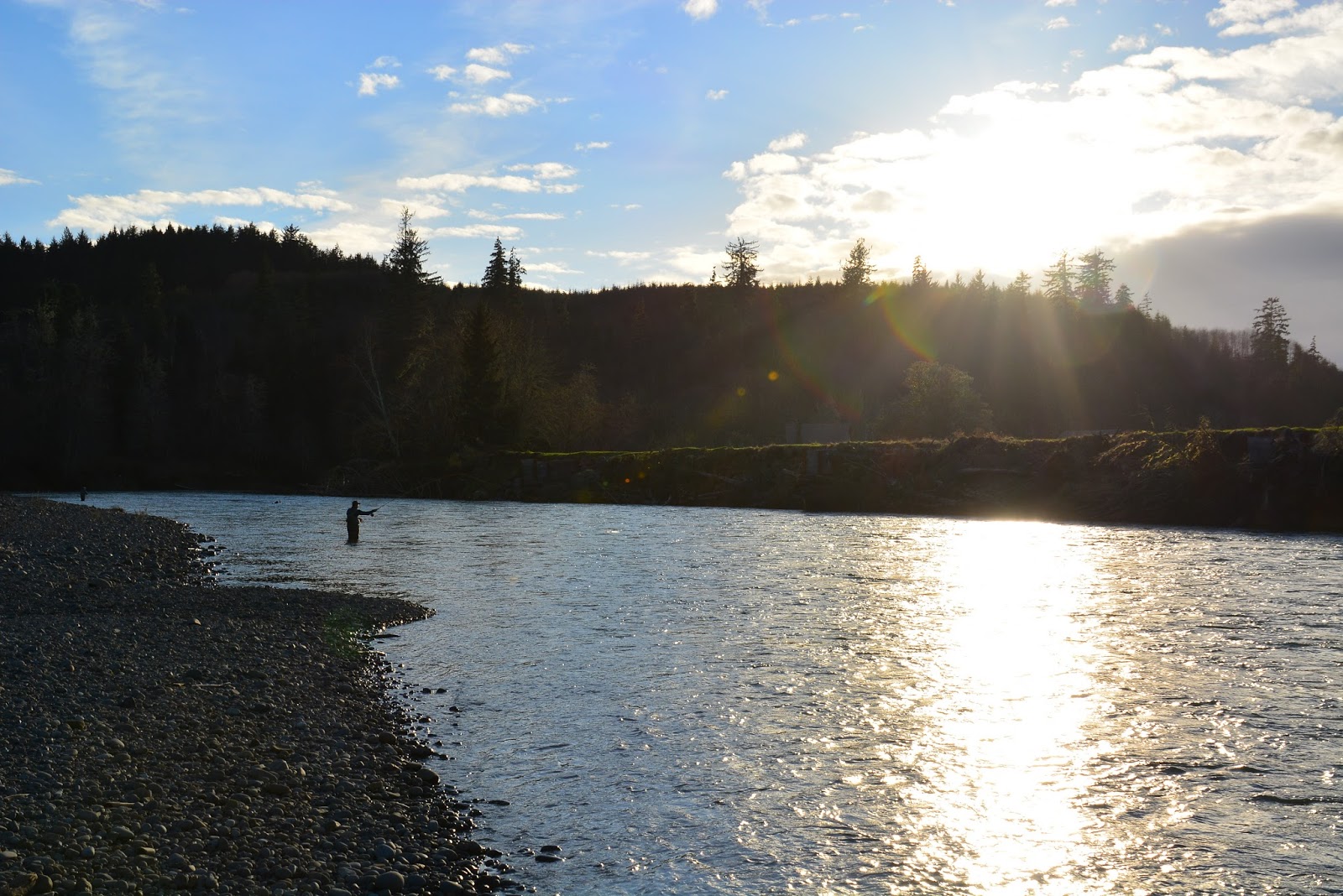 - James
Posted by Fly Fishing Specialties at 10:18 PM No comments:


Haven't you heard? Winter is the new Spring. With the rivers at epic lows in the valley right now, Jordan, George, and James headed up north and floated the Sacramento River below Redding. Water releases from Keswick were about 3,300cfs and conditions were perfect. 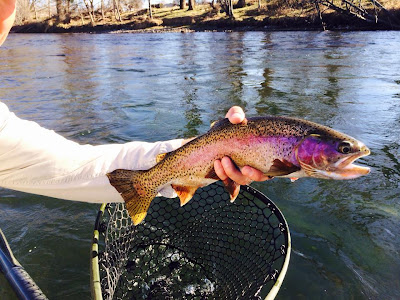 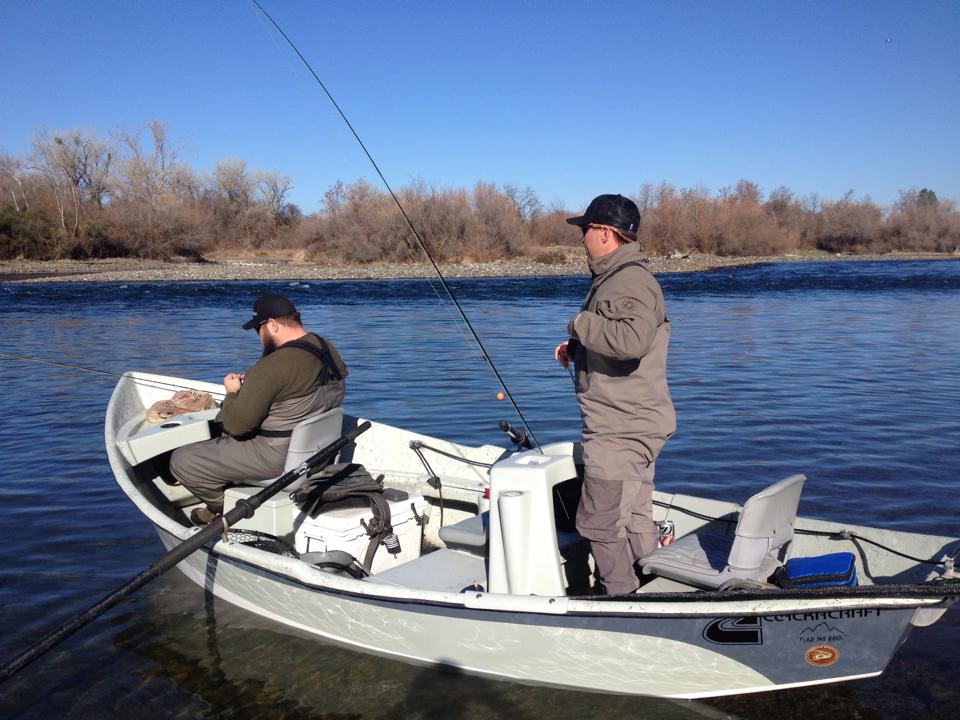 The river is big below Shasta Lake and fishing is best from a boat.  There are two good sections to float; Posse Grounds above Sundial Bridge to Bonnyview Road and Bonnyview to Anderson Park Fish Access.  It's possible to float both sections together also. 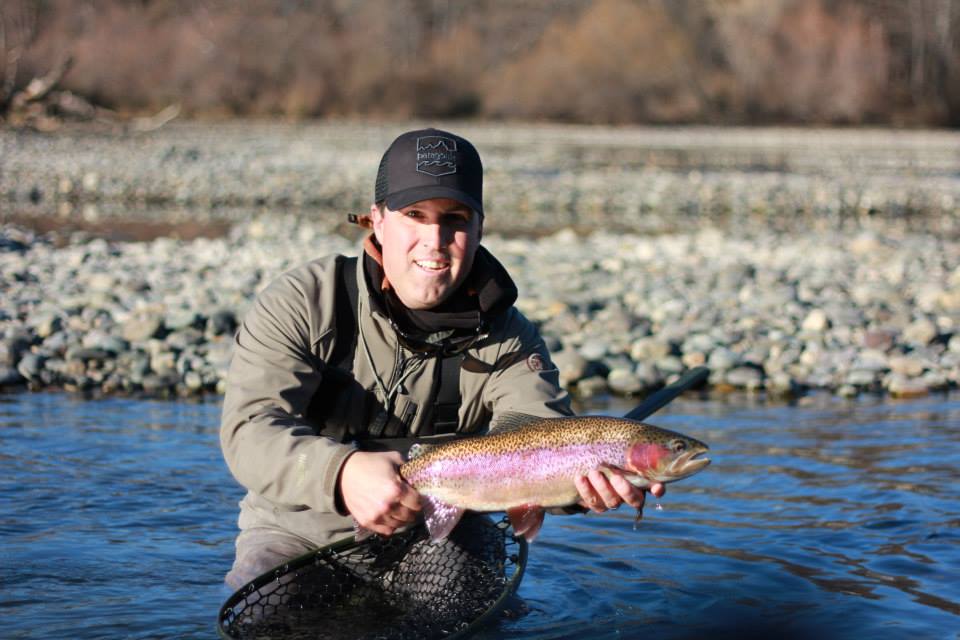 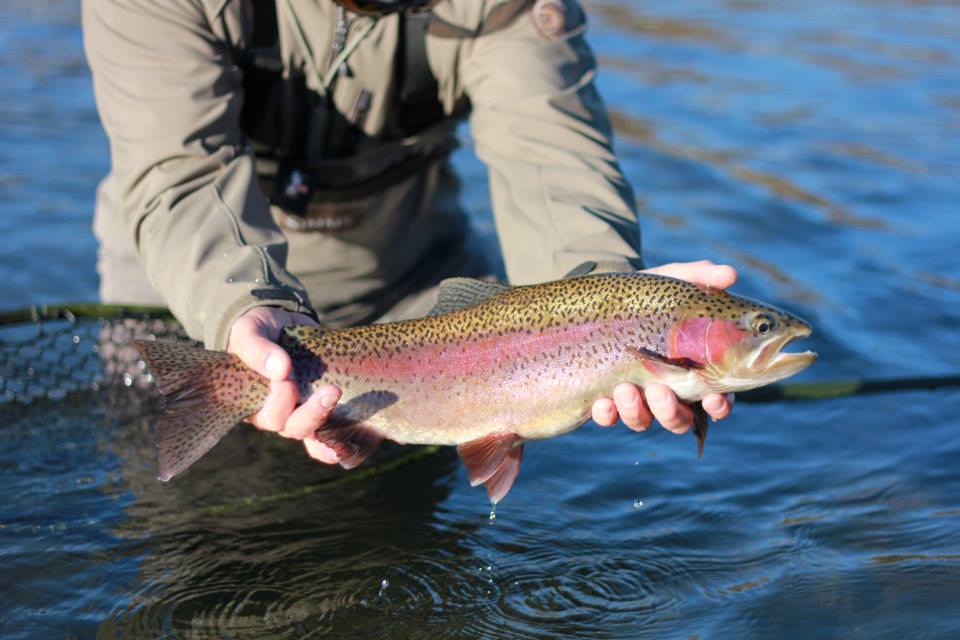 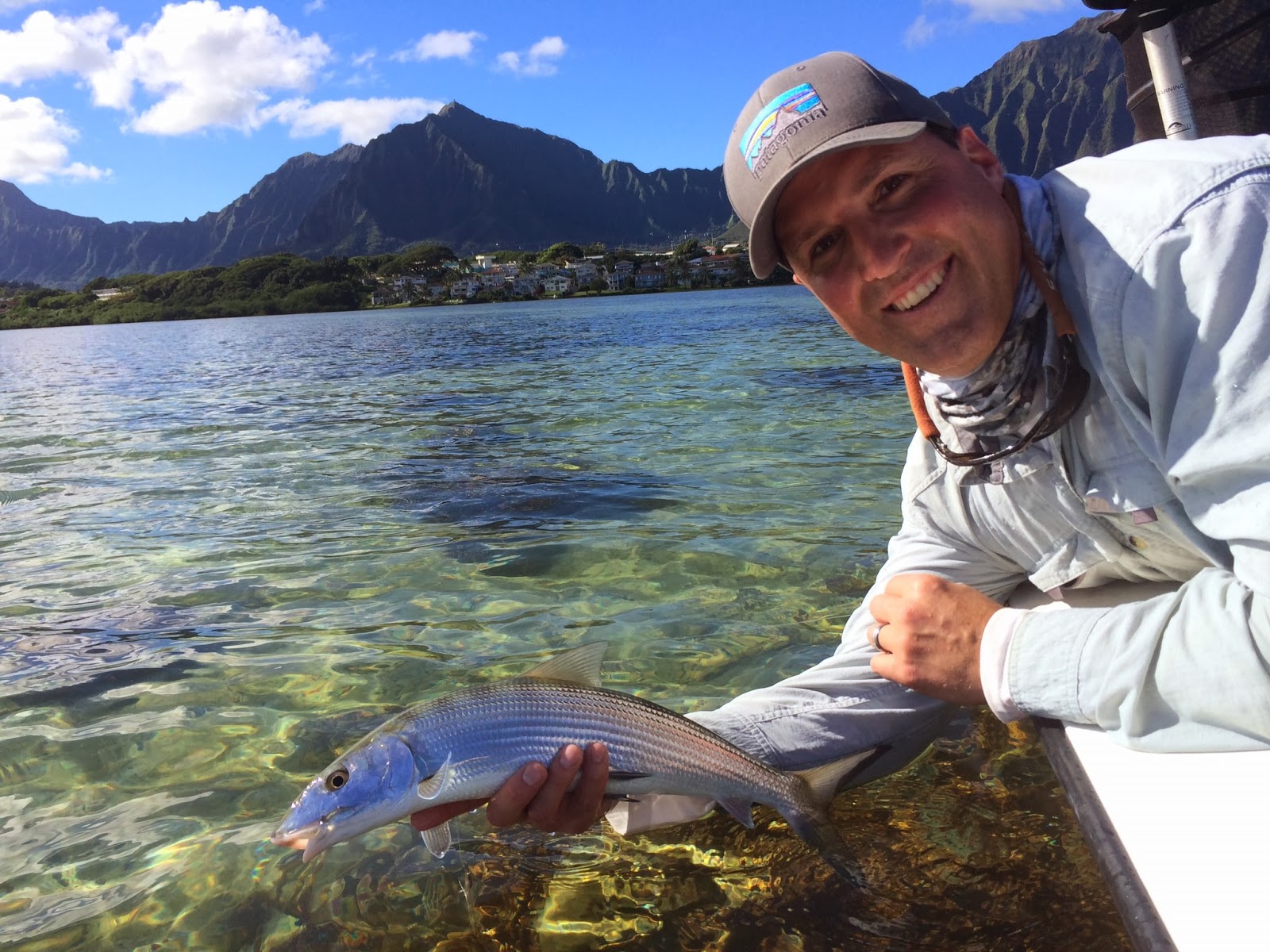 To most, Hawaii is a place to surf, relax, or simply take in the sights.  To a small percent, it's an undiscovered fly fishing paradise.  And my idea of paradise comes with the potential to tangle with 14 pound bonefish!  I have been traveling to Oahu for several years now with the intention of fishing my ass off and hooking up with one of the elusive brutes that cruise the flats surrounding the island.  I have to say, that is not always the case.  O'io (bonefish) numbers in Hawaii are not that great but the fish can be huge.  I have personally watched tailing fish with an estimated eight inches of tail sticking out of the water.  That's a big fish, do the math.  Unfortunately their skills have always managed to surpass mine.  On my most recent trip, over the last few weeks, I spotted and casted to more big fish than any other trip to date.  Although my biggest bonefish landed was only around the six pound range, I did break a fish a fish off on a 14.5 pound Seaguar floro loop.  I was pretty bummed to say the least. 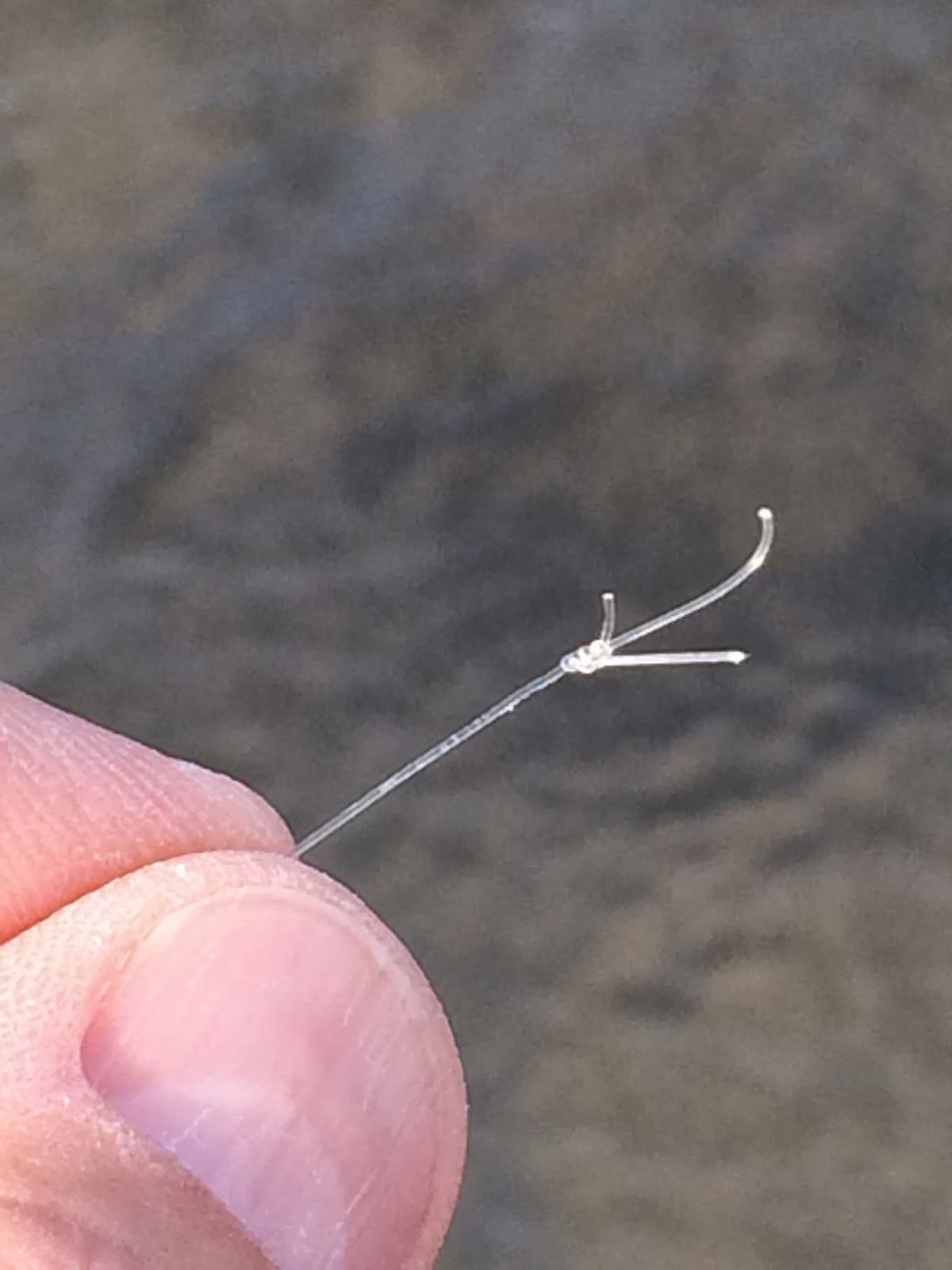 Can't blame that on the coral...

The tides in Oahu generally only fluctuate about two feet throughout the day.  Two highs and two lows.  Watching the tides and fishing accordingly is critical and the fish can be very particular.  Most of the flats I frequent are best fished on an incoming tide, around 0.6 feet but I do mix try and mix things up a little.  You will know when the time is right once you start spotting fish. 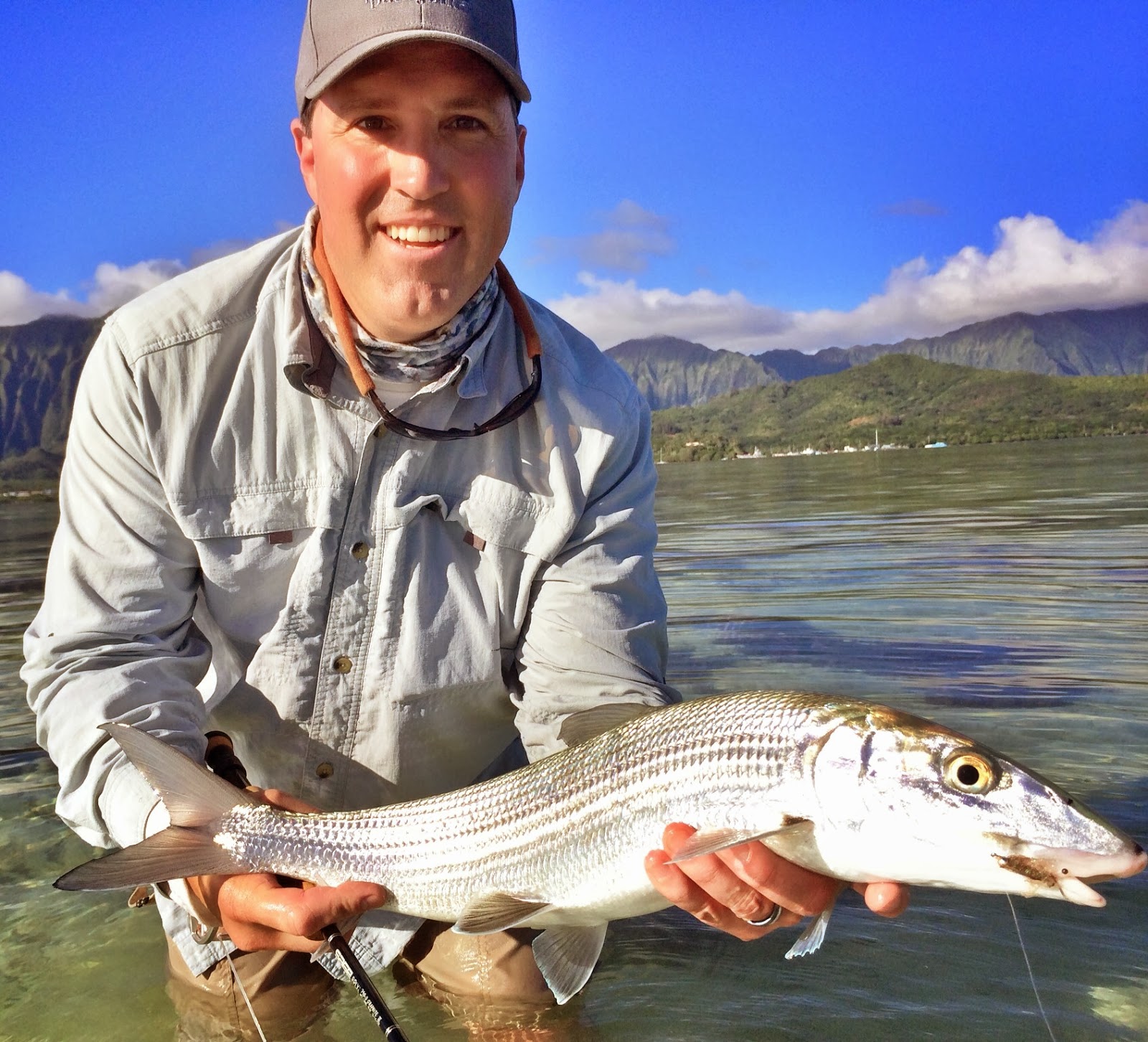 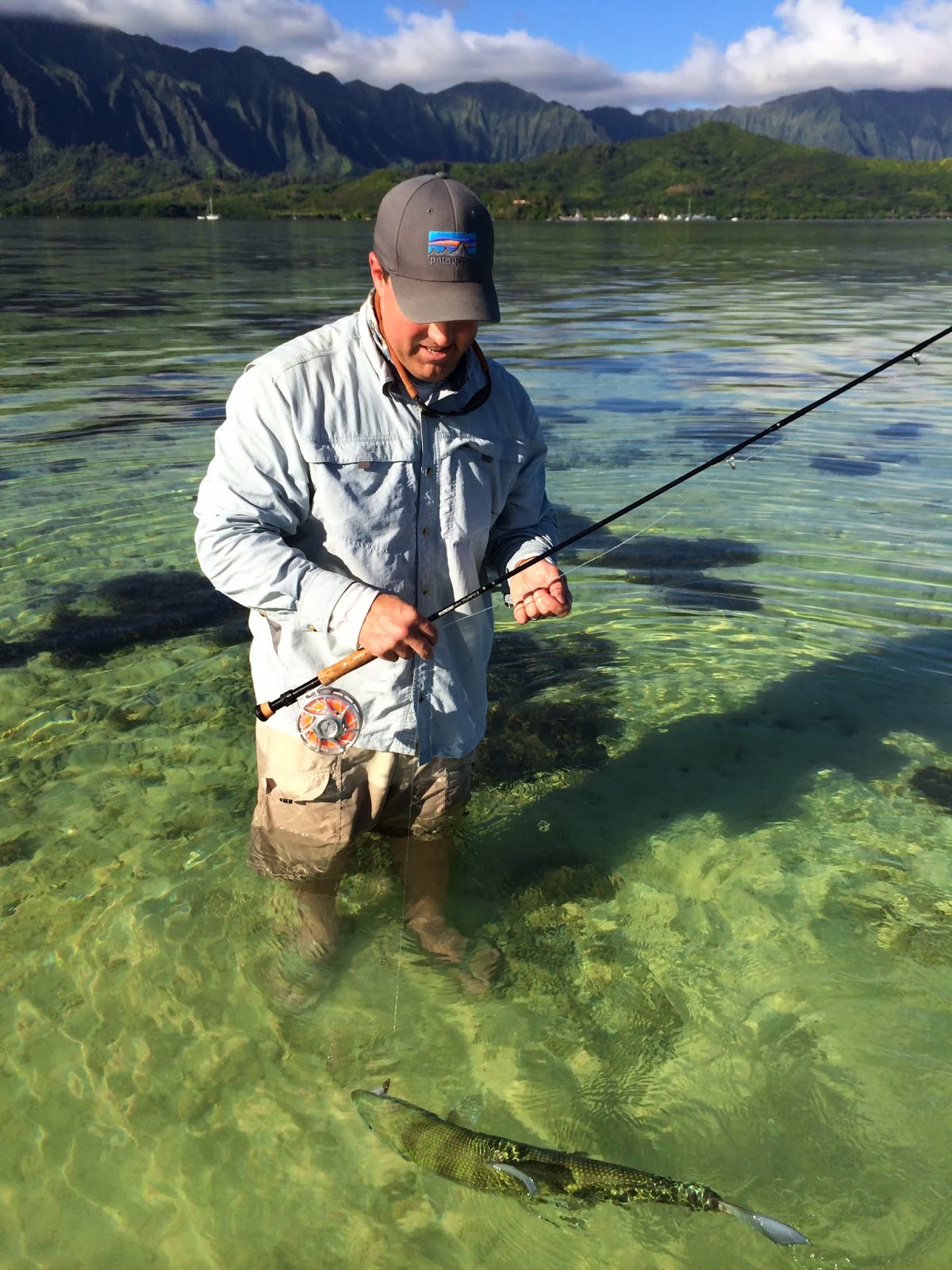 I typically go out with a guide the first week I'm on the island and then bounce around the rest of the time by myself.  I go with a different guide every trip but I may stick with the one I fished with this year.  I had the opportunity to fish with Captain Collin Huff of Hawaii On the Fly and it was awesome.  Check them out at http://www.hawaiionthefly.com/  We started out the day in Kaneohe Bay on the windward side of the island, east side.  K-Bay is known for its population of big fish and we actually came across a school of 50+ fish on one of the flats that day.  I know, pretty epic!.  Collin did a flawless job pushing the skiff across the flats and calling out fish as he spotted them, some I never saw.  The flats on Oahu are not like the typical flats you see in the magazine.  No long sandy stretches.  They are covered in vegetation and coral with the occasional patch of sand.  Everything looks like a fish.  On more than one occasion I chucked by fly at an invisible target.  He would say "Two o'clock, forty foot cast" and I would just cast... 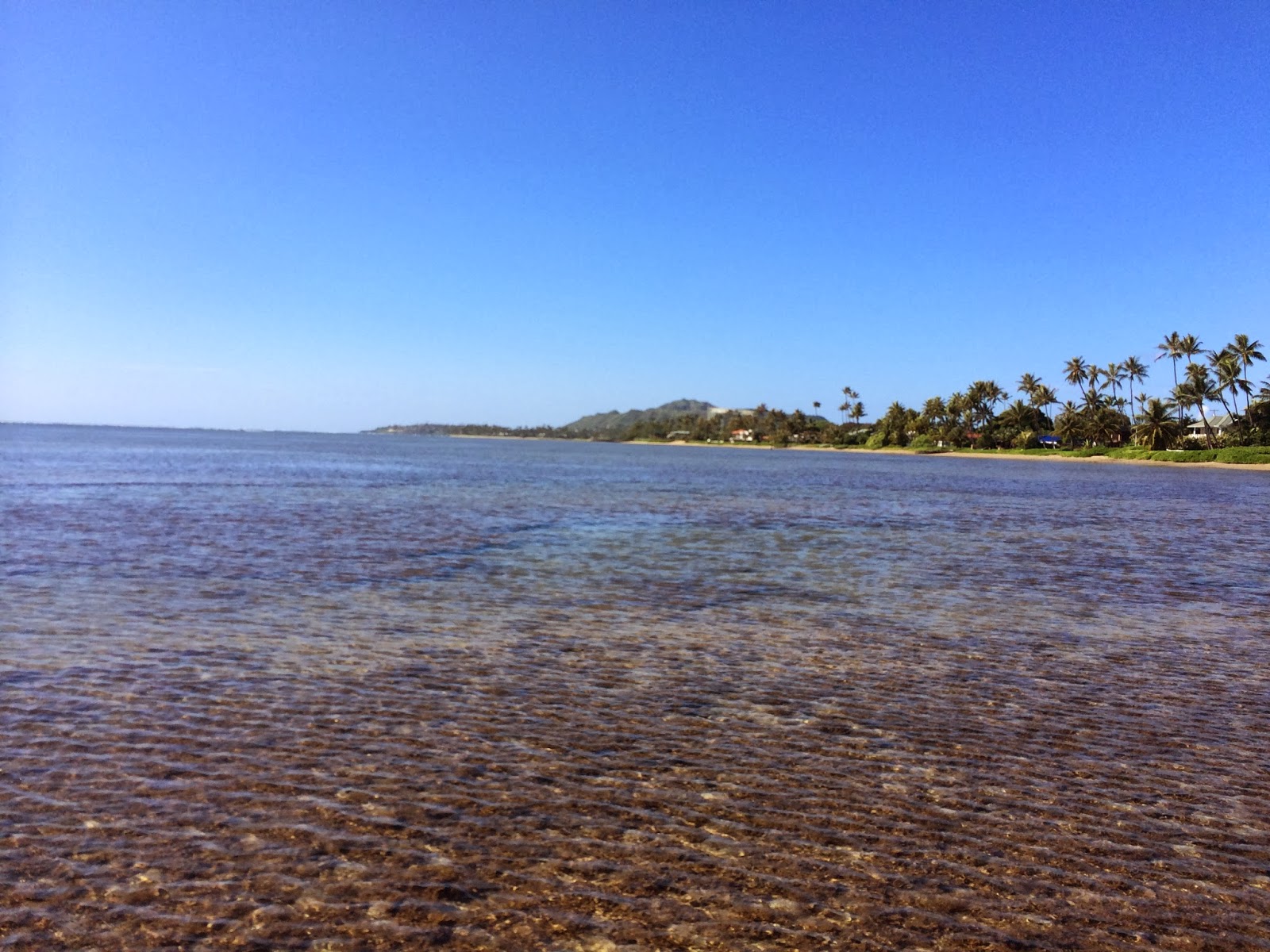 The clouds rolled in around mid-day and the glare became so bad we drug the boat over to the other side of the island and fished under bluer skies.  We chased "tailers" in some super skinny water the rest of the day up until dark.  I have to say, dude knows how to fish for bones and is pretty good company too! 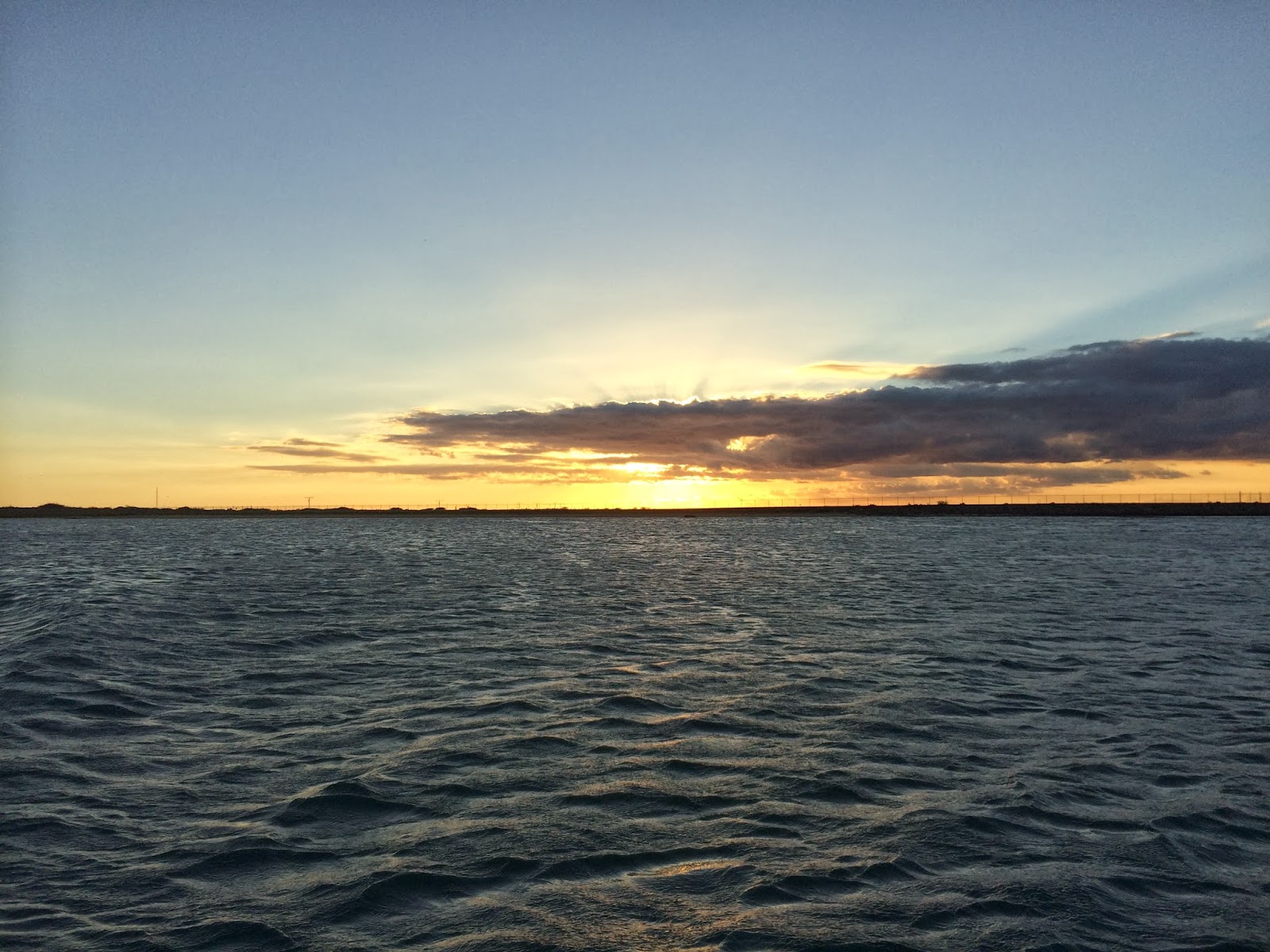